By: Emily Cook
Philly was 16 years old when the roof above his head was traded in for a not-so-starry night sky.

A homeless man sleeps on the sidewalk in Vancouver. Photo by Jay Black [CC-BY-SA-2.0]. 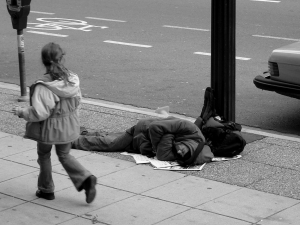 Another homeless man sleeps on the sidewalk in Vancouver. Photo by Jay Black [CC-BY-SA-2.0].

Philly was 16 years old when the roof above his head was traded in for a not-so-starry night sky.

Now in his mid to late twenties, Philly – as he is called on the streets – slouches into the chair of the Operation Come Home office, wearing a black jacket, sleeves torn with use, his orange hair in a deflated mohawk. Philly is what would be defined as a “hard-core” homeless person, who does whatever possible to stay on the streets, away from four walls and a roof.

Philly visits Operation Come Home regularly, an organization whose focus is creating programs that help homeless youth off the streets and reunite them with their families. But Philly says he doesn’t participate in any of their programming.

Having been in and out of prison throughout his time on the streets, Philly says he needs to be away from buildings to have his independence.

When the temperature gets cold outside, Philly says, he sleeps inside bank buildings, shelters, or wherever he can find warmth. In the summer, he can be found sleeping on park benches when he isn’t asked to leave by police.

Sitting in the office, Philly begins rubbing his hands together, revealing the tattoos across his knuckles.

He explains that once a person is on the streets, there’s no way off.

Others like Philly, who have been living on the streets of downtown Ottawa for years, watch out for younger street kids by encouraging them to return home while they still have the chance, Philly says.

“People don’t really stop to ask how you ended up out here, where you’ve lived and what quality of life you’ve had,” Philly says. “I wish they understood where we came from.”

Nobody stops to ask how living on the streets has affected him, he adds.

At his age, Philly says, he has given up hope of leaving the streets or of his situation ever changing.

This is why Operation Come Home is a “social enterprise,” she says.

The organization does social work with homeless youth, but also runs paid training programs to help them gain job skills and create a life for themselves.

By doing so, Operation Come Home hopes homeless youth will envision a future for themselves they may never have imagined before, says Elliot.