By: Lesley LeRoux
The lives of missing and murdered Aboriginal women in Canada will soon be commemorated through a traveling art installation created by artists across the country. 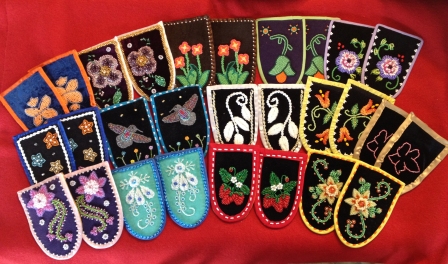 The lives of missing and murdered Aboriginal women in Canada will soon be commemorated through a traveling art installation created by artists across the country.

The project, Walking With Our Sisters, is a crowdsourcing initiative which has native and non-native artists sewing beaded vamps – the upper fabric of moccasins – to be assembled like footprints on a path of red cloth.

The installation will make its way to galleries across the country by fall 2013, including locations in Ontario, Quebec, Saskatchewan, Manitoba, and British Columbia.

Artist Christi Belcourt started the project after hearing about the number of Aboriginal women who have gone missing or have been murdered in the last 20 years.

According to a report by the Native Women’s Association of Canada, there are over 582 missing and murdered Aboriginal women and girls across the country.

The research initiative Sisters In Spirit, which spawned the report, began in 2005 and continues to be updated in order to raise awareness of the issue.

Belcourt said that many people never hear of these cases because not all media report them.

“If you’re listening to mainstream media, you won’t hear anything. You won’t even hear a missing persons report,” Belcourt said of the missing Aboriginal women.

“Yet, when a non-native person goes missing – a woman – sometimes that makes it onto the mainstream media nightly news.”

Belcourt said she constantly saw updates on social media about missing and murdered Aboriginal women, which got her thinking about ways she could address the issue in a public context.

After seeing one case on her Facebook feed every three or four days, Belcourt came up with the concept for Walking With Our Sisters.

“I had the idea of doing this piece, but it wasn’t physically possible for me to do this myself. I knew that I had to start a group page [on Facebook] right away,” she said.

“Within three days, I had over 100 people saying they would do it. So now we’re up to 755 artists who have agreed to contribute a pair [of vamps], and beading groups springing up all over the country.”

Just one glance at the Walking With Our Sisters Facebook group gives online visitors an idea of what the project is all about.

Artists update the page daily with photos showing their progress or finished vamps, each with their own personalized style and beaded image or pattern.

Some vamps are detailed with flowers while others have traditional tribal symbols worked into their design.

Belcourt left the criteria for the vamps open, providing only a template as a guideline for dimensions. She wanted to ensure each pair would be unique and show off the artist’s personality.

Once the vamps are complete, Belcourt has asked the artists to send them to her home in Sioux Narrows, Ont., where she will put the final installation together.

Belcourt said she’s unsure how many vamps she has received so far, but knows that several have been promised, and she sees the progress each day on the Facebook page.

The goal is to make at least 600 pairs of vamps to go on display, perhaps even more, to commemorate each missing and murdered Aboriginal woman.

One of the contributors to the project, Ottawa artist Jaime Koebel, is making three pairs of vamps to add to the installation.

Koebel teaches traditional Métis art in her community, from fish scale art to beadwork, and dances in the group Jaime and the Jiglets, which she founded in 2010.

Like many other artists involved in Walking With Our Sisters, Koebel draws upon personal experience to create her vamps.

The first pair she made is in memory of a student who visited her while on an exchange from a Métis settlement in Alberta. The 16-year-old was murdered in her sleep after attending a powwow a few months later.

Another pair is made in memory of Koebel’s grandmother, and the other she made for herself and her two daughters.

“It’s possible that, as Aboriginal women, we have a higher rate of being murdered or gone missing. But they’re white for innocence because they’re just young kids,” Koebel said of the vamps she made.

Belcourt said participation from so many artists, like Koebel, shows how the issue of missing and murdered Aboriginal women is of concern to people, whether it’s covered in the news or not.

“So when we’re sitting at home and something on the net affects us, whether it’s to do with the environment or some other issue, I think this shows that we’re not alone in that.”

Daniel Heath Justice, English professor at the University of British Columbia and writer of indigenous literature, spoke at the New Sun Conference on Aboriginal Arts about the power Aboriginal artists hold in raising awareness about Aboriginal issues.

“Indigenous artists affirm our continued presence,” Justice said, referring to the influence of the Idle No More movement today.

“There are conversations going on that haven’t been going on for a very long time. We have stories that are beautiful and heartbreaking.”

What Belcourt hopes to achieve with this project is to bring some of that heartbreak – the lives of missing and murdered Aboriginal women – to the forefront of people’s minds as they walk alongside the vamps.

So far, Belcourt has confirmed 18 locations across Canada that will accept the installation, and is asking galleries to pick up the cost of shipping the vamps to their next location.

“Funding is one of the biggest things right now,” Belcourt said.

“The second biggest thing is coordinating the schedule and figuring out what needs to be done at each of the locations.”

Through crowdsourcing the tour, Belcourt has been able to call upon artists and anyone interested to contact their local galleries and ask if they would be interested in hosting the installation.

Koebel is one of the artists helping to organize and secure a location in Ottawa, and is looking to the National Gallery, and ideally Parliament Hill, to display the vamps.

“It eliminates me having to sort of guess who may be interested or who wouldn’t,” Belcourt said of the crowdsourcing.

Belcourt hopes she will receive all the vamps by June, and estimates they will book the tour beginning this summer and into 2016.

The installation will not only incorporate the vamps, but could also include other mediums, like embroidery or even multimedia, if an artist decides they would like to contribute something different.

Belcourt said the most important thing is communicating that missing and murdered Aboriginal women and their families are respected and valued.

“I want this art exhibit because art has power. I want it to open up the dialogue and bring awareness to Canadians in the mainstream so they can really understand that this is happening,” Belcourt said.

“We have a serious problem on our hands. We need to value all women and girls. Nobody is disposable.”