On Sept. 16, Carleton University and Aga Khan Foundation Canada hosted Reporting Without a Parachute, a multimedia presentation given by photojournalist and reporter Marc Ellison. The discussion touched on all aspects of the freelance journalism business, with special focus on Ellison’s recent work interviewing former Lord’s Resistance Army (LRA) abductees in Uganda.

Two female survivors of the LRA in Gulu, Uganda, who had their lips cut off by rebels - a common punishment for women. 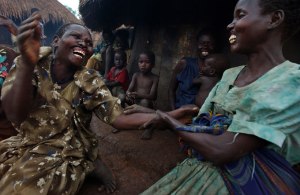 Two female survivors of the LRA in Gulu, Uganda, who had their lips cut off by rebels – a common punishment for women.

On Sept. 16, Carleton University partnered with Aga Khan Foundation Canada to host Reporting Without a Parachute, a multimedia presentation  by photojournalist and reporter Marc Ellison. The discussion touched on all aspects of freelance journalism, with special focus on Ellison’s recent work interviewing former Lord’s Resistance Army (LRA) abductees in Uganda.

Ellison, a recent Carleton Masters of Journalism graduate who changed careers after an unsatisfying 10 year stint in IT, emphasized the importance of revisiting war zones after the conflicts end.

By returning and talking to survivors, Ellison said, reporters get to cover more personal stories which are often ignored by the mainstream media.

“I’ve always been drawn to under-reported stories,” Ellison said. “One thing that always rattled me is the stereotype of Africa as a backwards and violent place. There’s a lot of misinformation out there.”

Ellison described himself as a “post-war correspondent” and discussed his numerous visits to Uganda, where he had the opportunity to interview young women who were abducted by the LRA, a notorious militant movement operating in Uganda and South Sudan.

In each of his two to three month stays in Uganda, Ellison asked the women questions about their lives before abduction and the difficulties of reintegrating into regular life afterwards.

Ellison presented a video interview in which he speaks to a young woman named Mary. Now 22, Mary discussed being captured at the age of six while collecting water at a local borehole. She spent 11 years in captivity, initially being used as a babysitter and ultimately forced to have relations with the soldiers. Upon being released back into her village, Mary’s mother refused to accept the children she had borne and brought back with her.

Ellison said he chose not to directly ask about what occurred during captivity. However, numerous women did open up about their experiences in the bush.

“If you take the time to sit down with them, you never know what kind of story you can get,” Ellison said.

He added that, while not as “sexy” as war journalism, post-war journalism can play a critical role in telling stories. To explore that idea, Ellison gave the women five digital cameras to film interviews with their friends and photograph whatever they wished.

But by far the trickiest aspect of Ellison’s work has been obtaining funding. While Ellison made ends meet by doing additional work for The Globe and Mail, MTV Canada, and Canadian Geographic, he also received funding through the International Development Research Centre (IDRC) and non-government organizations in Uganda.

“My IT career was very profitable but I just wasn’t happy,” Ellision said.

This October, Ellison will travel to Mali to work with Farm Radio International. He also has numerous projects in the works, including a series of panoramic photographs of a Ugandan refugee camp and an interactive online graphic novel titled Photo/graphica.

Both projects are currently in prototype phases, leaving Ellison to quip to the audience, “If you want to fund them, let me know.”