By: Caitlin Hart
The best comparison I can make to explain anxiety is having your iPod stuck on a song you hate. You are forced to hear it over and over, with no relief. Everyone tells you to just click next, but the button is stuck.

Caitlin enjoying her "happy ending" at a baseball game. Provided 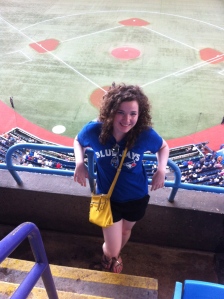 Caitlin enjoying her “happy ending” at a baseball game. Provided

The best comparison I can make to explain anxiety is having your iPod stuck on a song you hate. You are forced to hear it over and over, with no relief. Everyone tells you to just click next, but the button is stuck. I am a firm believer that personal experience can bring people together. Nothing is more powerful than when someone has been through the same things as you. Mental health is talked about more frequently, however what is presented is typically statistical information. Few are willing to openly talk about their own struggles with mental health.

So here’s my story.

Anxiety and depression run in my family. It has been a part of my life for as long as I can remember. I have a mother who suffered from clinical depression, in addition to various family members who went through bouts of anxiety. For the early parts of my life, anxiety made appearances mostly in the form of nerves and maybe the occasional panic attack.

It was when I was 19 that things got worse. I took a gap year between high school and university. Reflecting upon that year, it was a mix of discovering who I was and pure hell. All of my friends moved on to university and I was left severely underemployed. This was a source of shame for me as I was supposed to be saving for university.

The exact trigger for me was when I visited the doctor concerning abdominal discomfort. The doctor wrongly diagnosed me as having an ovarian cyst and ordered an ultra sound. I realize that to most people this does not sound life threatening, but to someone who was in a fragile mental state to begin with, this was a linch pin. My thoughts at this time were not rational and no matter how hard I tried I could not get the worrisome thoughts to go away. I was stuck on repeat.

Anxiety goes from zero to 100 in a matter of seconds, making the most inane things seem life threatening. I kept wondering what the ultra sound was going to show. The discomfort continued and I honestly did not know what was wrong with me. I had to wait two weeks until I received the results of the ultra sound; two weeks that were absolute torture. I got to the point where I was having panic attacks everyday.

What is often not mentioned when talking about mental illness is that it can manifest physical symptoms. True, they are in your head, but that’s the worst part.  You cannot escape them. For anyone who has never experienced a panic attack it basically mimics a heart attack; quickened pace, difficulty breathing and chest tightness.

Thankfully, my story has a happy ending. I sought help. My family was always there for me to talk to and I had the luck that they had been through the same symptoms.

Now, does this mean I am cured? No. This is something that crops up when I’m stressed, but due to a good support system and coping skills I deal with it better. The most powerful thing is knowing that help is available. Even in my darkest days I knew this was not permanent, I knew I would get better because I would not give up. That is the message I have to anyone suffering from mental illness: you can get through it, it is tough but it is possible.

For mental illness awareness week I hope we all take the time to realize there are many suffering and few who talk about it. Let’s open our ears and our minds.

2 Comments on My story: Mental illness