The entrance room in the new Aboriginal Centre at Carleton University. Photo by Erica Howes.

The entrance room in the new Aboriginal Centre at Carleton University. Photo by Erica Howes.

The 1,850 square-foot centre located in Paterson Hall is six times larger than the previous facility that was located in the tunnels near Tory Building.

There are currently between 500 to 700 aboriginal students at Carleton.

Designed in a large, circular shape, the entrance to the centre is surrounded by windows, which face onto the quad. On either side of the entrance are a kitchenette and a lounge, which aim to create a comfortable environment, Hill said.

Traditional ceremonies will take place in an Elders lodge, which is enclosed by vibrant purple walls. The centre provides private rooms with tables and chairs, ideal for meetings and smaller gatherings, Hill said.

There are 10 computers available in the lounge, and a small, circular room where students can make phone or Skype calls in private.

Canadian architect Douglas Cardinal designed the new centre in collaboration with the Azrieli School of Architecture and Urbanism at Carleton, with the centre’s clients in mind.

Cardinal, who also designed the Canadian Museum of Civilization, said every building begins “from the inside out,” explaining the importance of first “understanding the people.”

The circular rooms and structures within the centre represent various cycles in the natural world, Cardinal said. The circle is also a symbol of equity in the Aboriginal community.

“It’s more of a homey feeling,” said Hill about the new centre. “ It’s more organic as opposed to institutional and that’s what we wanted – to make the students feel more comfortable.”

Melissa Penasse, a student in the Aboriginal Enriched Support Program (AESP) at Carleton, and student liaison for the Aboriginal Centre, said the Carleton Aboriginal community is “like a family,” and has had a big impact on her education.

“I think that’s what helped me stay in school, having that place to go where I felt comfortable and felt at home,” Penasse said.

The new Aboriginal Centre aims to reach out to aboriginal students like Penasse, said Rebekah Elkerton, aboriginal resource coordinator at the centre.

They are now able to have an impact on more students, something that would not have been possible without Carleton’s support and willingness to help, said Elkerton.

“The University has been very supportive in helping with events and giving us this new space which is a really exciting next step in building the community here,” Elkerton said. “It’s amazing, because not every school has this.”

The kitchenette in the Centre, photo by Erica Howes. 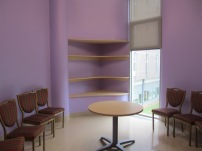 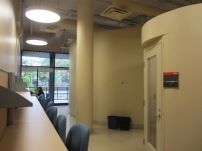 The study space lining the back wall and the private phone call room, photo by Erica Howes.