By Erica Howes Kayla Hounsell, a JHR trainer, takes us into a South Sudanese TV newsroom 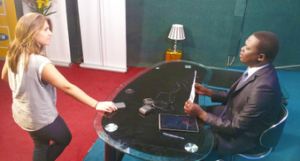 Kayla giving notes to one of the anchors after the newscast. (Photo by Grant McDonald)

In this year’s fall semester, our Carleton chapter of JHR raised just more than $830 for projects in South Sudan. After a month of working in South Sudan as a JHR trainer, Kayla Hounsell, CTV reporter and Carleton graduate, shared stories of government-controlled newsrooms and the extreme restrictions on press freedom. She shed light on where that $830 is going and why it really matters.

Kayla spoke about her experience and struggles inside the newsroom of Juba’s TV station, coincidentally called CTV (Citizen Television). The station only had one transportation vehicle, which made the choice of stories limited. Reporters received press releases from the government, which ended with “your attendance is expected,” meaning there was no choice but to write a story on it. Although Kayla said they’re led to believe the South Sudanese government supports press freedom, when the government is in control of which stories are broadcasted, is it really freedom at all?

South Sudan is the world’s newest country, with only four years under its belt. After gaining its independence in 2011, a civil war shortly followed and hasn’t let up. Kayla said this dominates much of the newscast and each broadcast ends with a comment about striving for peace. But Kayla said with the work of JHR, media development is happening. On Fridays in the Juba-based CTV newsroom, Kayla said there were rarely government events so she took the opportunity to use it as a day to teach the journalists (who had limited journalism experience) on how to cover authentic news. By the end of her month, the crew had reported on a human rights story about the unsafe conditions of “stone breakers,” and gained a greater understanding of what human rights coverage looks like. This is among many of JHR’s success stories. In her free time in Juba and since returned home, Kayla has written extensively about her experience and even found many Canadian connections stories which are published on her home CTV Atlantic site here.

While we were proud of the $830 we fundraised last semester, it’s hard to understand the significance of funds sent an ocean away to a country that’s only existed for a couple years. The money we raised will go towards reporting workshops and professional mentorship sessions, providing journalists with the skills and equipment they need to produce the stories that need to be covered.

Kayla emphasized that through the support of JHR, newsrooms in South Sudan are able to break away from their puppet-like role controlled by the government, and were able to cover human rights stories. Essentially, they are able to report on the news. Journalists for Human Rights is about mobilizing media and changing lives, and from Kayla’s talk it was evident that the work JHR is doing in South Sudan is having a positive impact. JHR’s work is allowing journalists in South Sudan to do their job and report on the news, which in turn is empowering to us because it reminds us that we, a group of Carleton students interested in journalism and human rights, are part of that change.